My house is shaping up to be very neutral with a lot of whites, grays, and blacks.
It feels like a peaceful, serene space amidst my very hectic life.  I love it.
On the flip side, I’ve been feeling a strong desire for some color.
Here are a few photos I have pinned that really speak to me…
Having my pinned photos on my mind, I woke up one morning with some “brilliant” idea to cover my stairwell in colorful stripes to add a little peak-a-boo hit of color to my house.
Here is a before shot…even before we started construction. 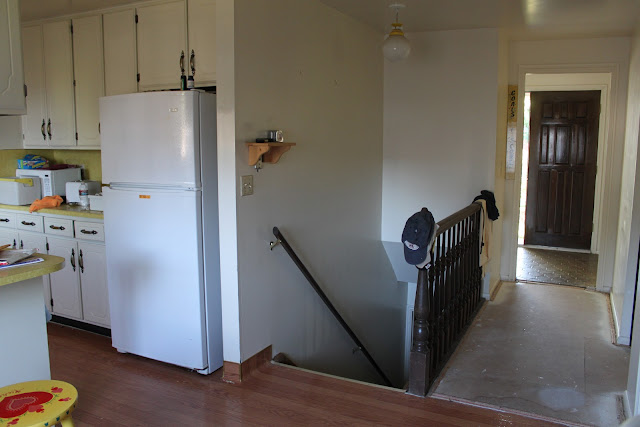 One of my wonderful sponsor’s, Frog Tape, sent me a box of tape that has been burning a hole in my closet screaming to be used.  Now, I just needed an adjustable ladder so I hightailed my way to Home Depot to rent one early Saturday morning. 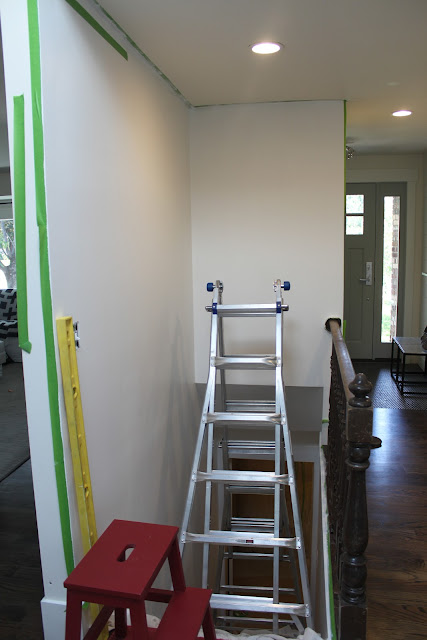 I placed random widths of tape the length of the wall taking extra care to make sure then were even with the use of a long level. 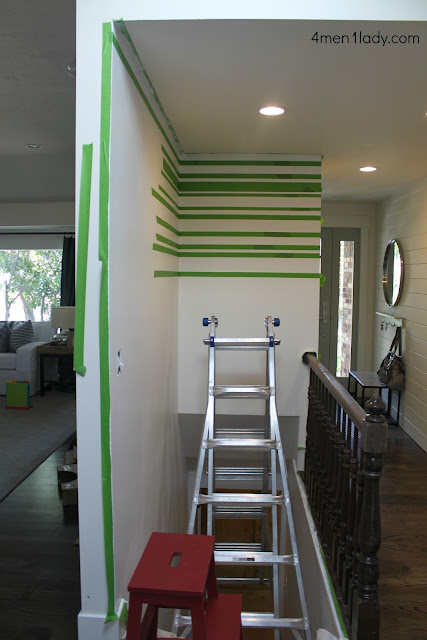 Here I am, bright eyed and bushy-tailed early in the morning. 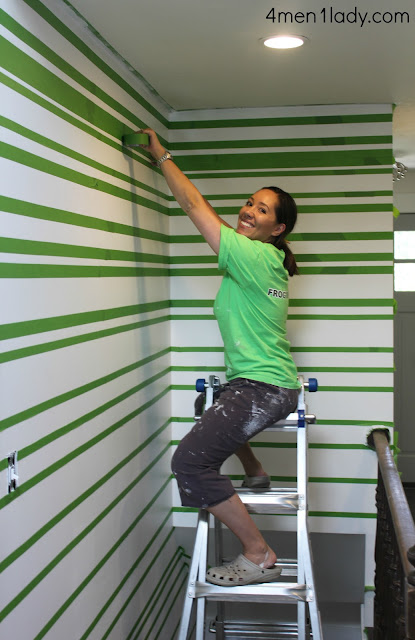 Disclaimer: I’m so NOT using this ladder the right way.
Ladders are not meant to be straddled, let alone set on en-even stairs, let alone dangling above a flight of stairs without hanging on to anything.
Don’t try this at home. 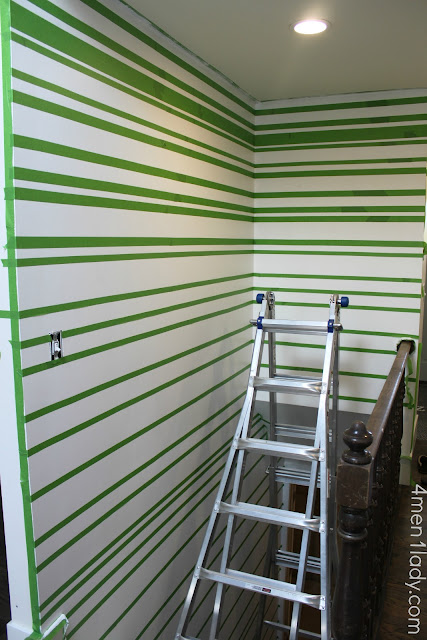 I finally made it to the bottom of the stairs where you can see my taping became much more spaced out as my stamina began to drop off. 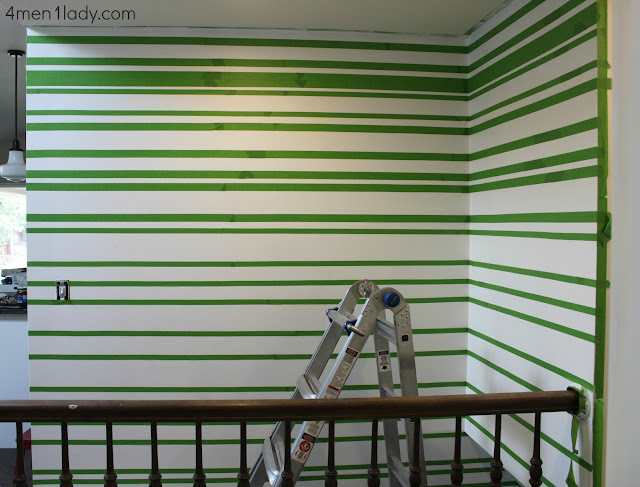 Here I am looking worn-out after hours of taping, painting and climbing up and down that dang ladder, trying hard to quickly finish my project before my time was up with my rented ladder. 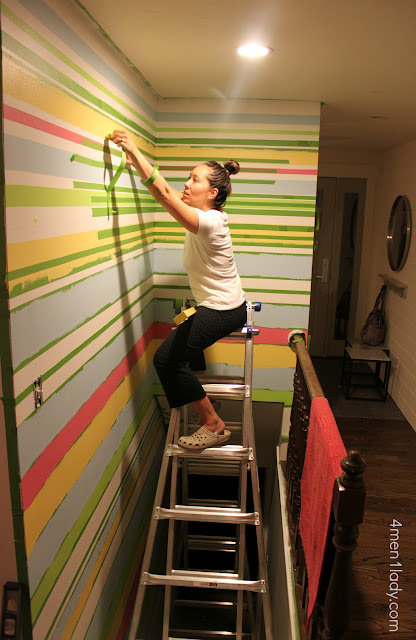 And here’s the after.
I actually had more stripes and two more colors planned (black and a deeper blue) but fatigue and time got the best of me.  I will say that my Frog tape didn’t let me down in the crisp lines and no paint bleeding department.  Worked like magic! 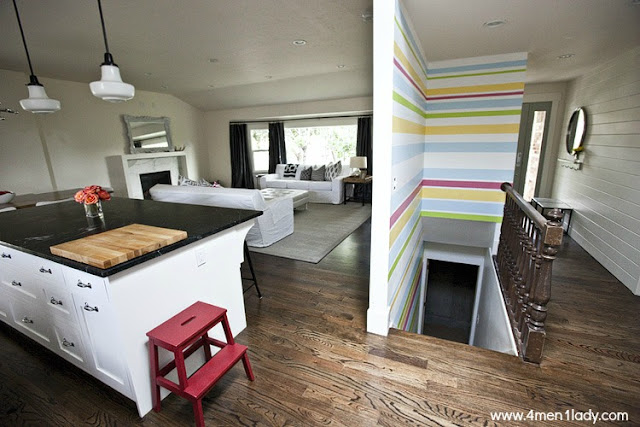 I started to get a little “uh-oh” feeling early on in the project but the mister told me to just keep going hold any judgements until it after was finished. 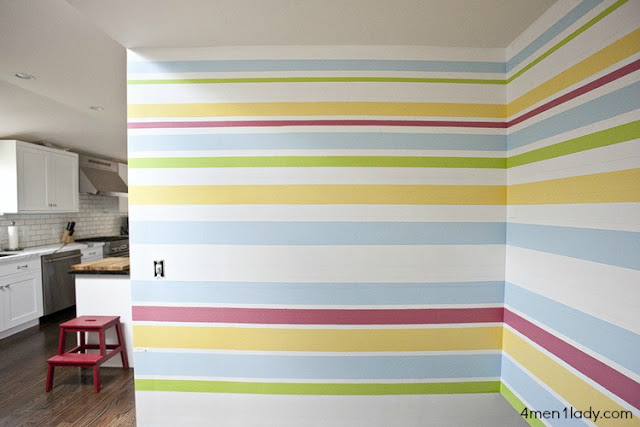 So would I call it a success?
Hmmmm?
Remember the movie Jerry Maguire where Tom Cruise gets a “brilliant” idea to completely change the way the sports agents to business so he stays up all night writing reports to everyone in the company.  When he awakes the next morning he realizes he made a huge mistake and his “brilliant” idea backfires on him.
I would call this my Jerry Maguire project.
Yes, it’s pretty cool but just not right for my space.
The Mr. had to go rub salt in my wounded ego when he referred to it looking like Easter. 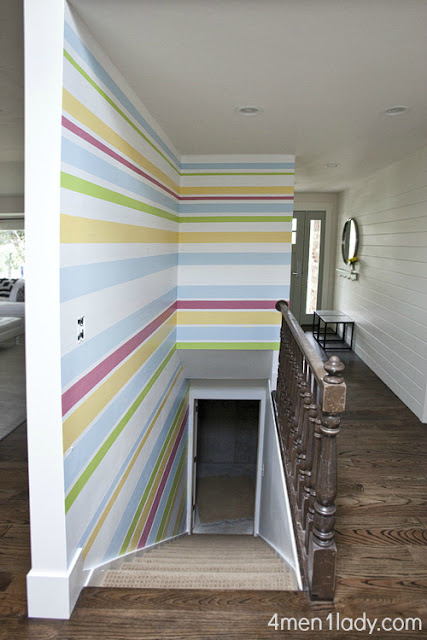 Re-thinking it (as well as a new coat of paint for the banister).
*Thank you again to Michelle Rasmussen of Wondertime Photo for the three after pics.*
*Thank you also to Frog Tape for providing me with the best tape ever!*