Exciting progress is being made on the house which I’ll share later.
In the meantime, it’s time to get serious about counter top selections.
I’m smitten with Calcutta Marble but wondering if I’ll be able to allow real life to happen while in the presence of these gorgeous counters?
(Forget that, I think the first important question is can I even afford Calcutta?)
You may remember my past discussion about white marble alternatives here.
Furthering that discussion, I had come across white quartzites (not to be confused with quartz which is typically a man-made product) in my online search for marble look-a-likes.
﻿

﻿I set out to source quartzites locally so I could see them in person
(as there are countless variations with any stone).

After calling half a dozen slab yards I came up empty handed.
I met Stephanie through email with MGS through their blog, Granite Gurus (which is a wealth of knowledge on just about every single surface out there).  What I love about them is they actually do their own testing with common substances that may come in to contact with the surfaces to see whether they’ll etch or stain.
Check out their results in the kitchen and bathroom: 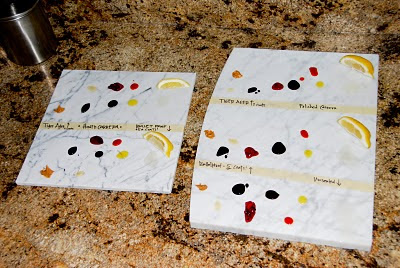 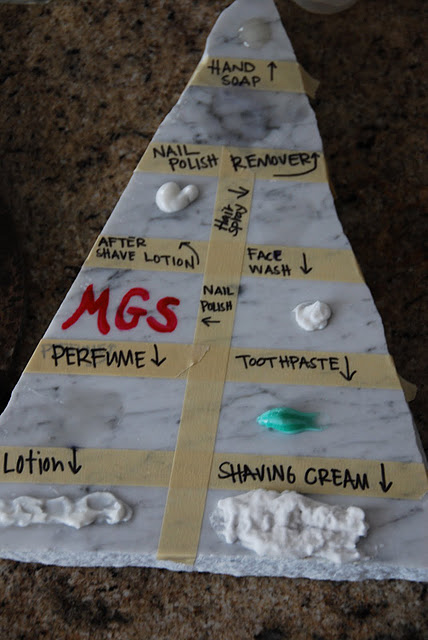 Read more here.
We got to emailing and she educated me on quartzite.  Here’s what Stephanie said,

“My biggest tip would be to get a sample from the same bundle that you are planning to purchase and then do some testing. Make sure it doesn’t etch with acids and make sure it doesn’t stain with the items that you always have in your kitchen. I personally have never had a problem with quartzite etching in the 8 years that I’ve been in this industry but I have heard of it happening. I think in those cases the quartzite may contain some calcium which is causing the etching. I always encourage my customers to take the time to do some testing.

I see quartzite stain every once in a great while, but it’s actually relatively easy to get a stain out where as an etch is there to stay. So staining isn’t as big of an issue. Quartzite is really hard and dense, so we have actually found that it doesn’t necessarily need to be sealed. In fact, sometimes sealing it is a bad idea because the sealer won’t absorb into the stone and just sits on top. We had one instance where we thought the quartzite had etched. We came to figure out that it was actually the sealer changing appearance because it was just sitting on the top. Once we stripped the sealer off the counters were great. Every color of quartzite is different too, some definitely need to be sealed. So I guess I would say my other piece of advice would be to hire a fabricator that is experienced with quartzite. It’s not only more difficult to work with than typical granite, there are also just some tricks with sealers and what not that take experience to figure out.”

She also referred me to Cory with Italia Granite which (cue harps) also carries Super White
Quartzite! Here it is: 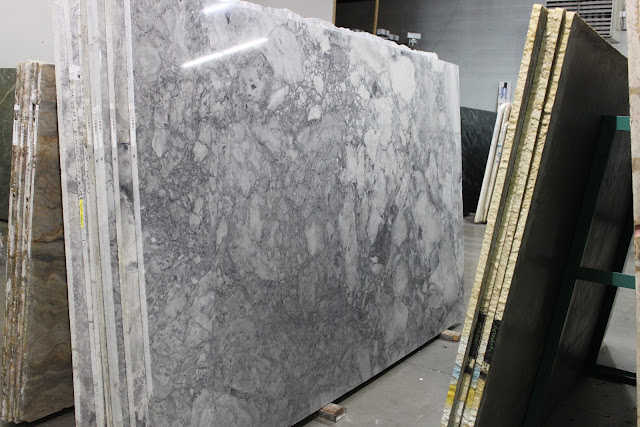 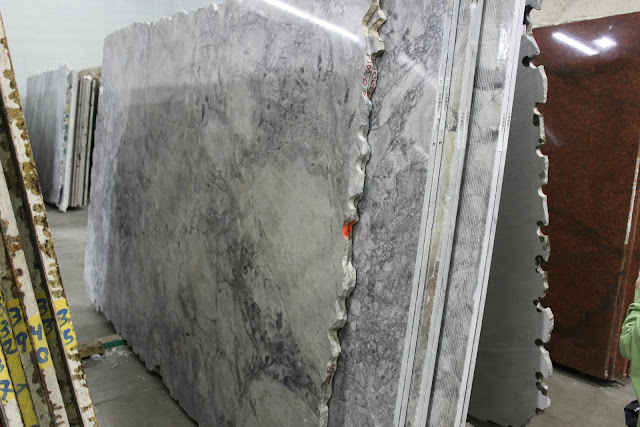 Cory with Italia Granite said you have to be careful with where you buy it from.
Sometimes you may find a lower quality slab which may tend to be brittle if it has excess of calcium in it.
Also, hiring an experienced fabricator is key as well.

Why do I feel like that made my decision all the more difficult?